2015 was an incredible year. The list of great climbs is pretty thorough, but here I have selected just a few that stand out to me as being particularly special. Here is the short list for my best climbs of 2015!

La Travesia Del Oso Buda (Reverse Traverse of the Torres) – This ascent was more of my partner, Colin Haley’s, doing than my own. It was my big introduction to climbing in the Torres and initially everything felt foreign, particularly climbing in the rime mushrooms. Topping out our final peak was a relief and but even close to the end of the journey. The climb certainly set the pace for the rest of 2015. 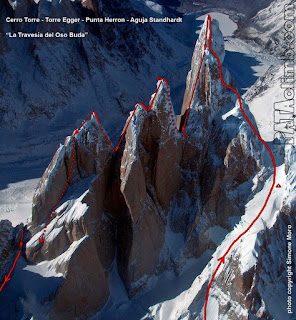 Directa de la Mentira (First Integral Ascent of Cerro Torre’s North Face) – Only a week or so after the Traverse, Colin and I were back on the Torre. This time many small problems threatened to shut us down; a faulty fuel canister, falling ice, running water, more falling ice, strong winds… Each of these problems we were systematically able to work through as a team and topped out at sunset the second day on the route. Another all night rappel ended one of my favorite adventure climbs in my personal memory bank. 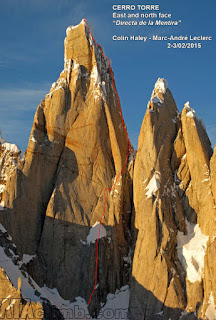 The Corkscrew, Cerro Torre (First Solo Ascent) – The Corkscrew was undoubtedly the hardest ascent of the year. Snuck in during a dauntingly short weather window between rain showers and a biblical windstorm; the climb began with free soloing in the dark on wet and iced up rock and ended with a sprint for the summit in a race against the impending storm. As a child I had always dreamed of being an explorer, or a scientist making new revolutionary discoveries. Soloing the Corkscrew felt like a brief ‘step into the future’ so to speak, in a sense bringing to life that dream. 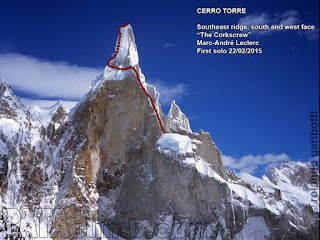 Northeast Buttress, Slesse Mountain (First Solo Winter Ascent) – This was the route that had inspired me to work hard and learn the skills I would need to climb in the mountains at the age of 14. Returning again to this route to attempt the second winter ascent and first free winter ascent alone, was the opportunity to take the things I had learned in other places to and apply them to raise standards in my home area. To top things off, the quality of the route in winter was well beyond any route I had ever climbed in the North Cascades. Beautiful ice streaked grooves, perfect styrofoam and a daunting mixed headwall led me to the summit overlooking the Fraser Valley I had grown up in.

Séance Tenante, Gorges du Verdon – It is so surprise that a trip to the birthplace of modern sport climbing brought me to likely the finest sport route I have yet climbed. Perfect streaked limestone, twin tufas, and an overhung prow set above the scenic Verdon Gorge; Séance Tenante is a true masterpiece of the 80’s.

The Raven, Squamish B.C (First Free Ascent) – Soloing the Raven, in big wall style, was a crash course in hard aid climbing. Eventually free climbing the white pillar on pitches 3 and 4, via rappel access from Astro Ledge took several trips over the course of the following two summers. Atypical for Squamish climbing in its steepness and the bold athleticism involved with the crux pitch, the all gear protected finally also provides uniqueness with its razor thin layback flake protected with micro cams high above the dark North Gully.

Pipeline, Squamish B.C (Free Solo) – Pipeline was my personal crash course in offwidth climbing early in the year, with a rope of course. At the time I was dumbfounded by the fact that the route was free soloed onsight in 1979 by Greg Cameron. By July my offwidth technique had come a long way, and although I had not revisited the route in the months in between I felt ready to return for the ropeless ascent. I rode my mountain bike to the trailhead in the early hours of the morning, and was surprised to spot on owl lurking in a tree branch along the way.
At the base of the offwidth I felt the intimidation, but once I began to climb it all evaporated and I enjoyed every inch of the climb. At the crux I pulled into a layback simply to enjoy the exposure of the pitch, and from a stem at the apex of the overhang I bouldered back into the crack and shimmeyed my way to the top of the wall with a smile that I could not wipe for the rest of the day.

The Venturi Effect + Solar Flare, The Incredible Hulk (Onsight Ascents) – California is a dreamy place for those who love clean granite cracks and everything from boulders to big walls. With Brette Harrington I made two lovely trips to attempt these routes, both established by one of my personal heroes, the legendary Peter Croft. To not fall off either of the routes was a pleasant surprise. Flawless granite, technical climbing and a beautiful atmosphere set these climbs high on the quality pedestal. The camping in the valley beneath was as lovely as the climbs themselves with plentiful bouldering and scrambling opportunities, vibrant green grass and a deep blue lake.

Tomahawk/Exocet Link-Up, Aguja Standhardt (Onsight Free Solo) – In September I returned to Patagonia hoping to solo Aguja Standhardt in winter. When the weather Gods provided me with a six day window beginning the day that winter ended I happily accepted that I would instead be climbing in Spring and headed into the mountains. The highlight of course was climbing my main objective, the incredible Tomahawk/Exocet Link. I carried some gear in case I needed to belay, but conditions were ideal and I never had to make use of it during the climb. I found myself on the summit 12 hours after leaving basecamp and was back on the glacier before darkness set in. With the whole Torre Valley to myself, this was a deeply satisfying adventure experience.

The Shaft/Free Muir, El Capitan – Free climbing El Capitan was my girlfriend Brette’s idea, and when we selected the Muir Wall as our route of choice I had little anticipation of sending the thing. Fate would have it that two other friends would accompany us on the route, and as none of us really knew how to climb big walls it began as quite the shit show. There were problems with teamwork, and several frustrating episodes throughout the ascent, but topping out with 33 pitches of mostly hard climbing beneath us was an amazing feeling. More than anything the quality of the climbing was incredible, and Brette and I had never had to work so hard to pull off so many pitches of technical rock before. We can’t wait to return to the captain to free climb another route, likely as a team of two.

Nightmare on Wolf Street, Stanley Headwall – Surprisingly, before this climb I had never in my life clipped bolts while mixed climbing, nor had I climbed a hanging dagger of ice. Having the opportunity to enjoy this amazing route with Brette, and both ski out by moonlight afterwards was the perfect way to end the 2015 climbing season. Lets see now what 2016 brings, I feel it will be good. The psyche is high.
Posted by marc_leclerc at 12:14 PM