So the past 8 days were pretty sweet, I ended up spending a few days ice climbing around Lillooet and then this past weekend in Revelstoke trying my best to learn how to ski. I had only expected to make a day trip to Lillooet but after swinging my tools for an afternoon I booked a room and ended up staying five. All five days were awesome, conditions were quite good and I manage to climb several great routes I had never been on before. The three days skiing were also really fun, by the third day I was feeling substantially more comfortable but there were embarrassing moments. Perhaps having disproportionately long limbs would help explain why I found strapping even longer boards to my feet and then moving downhill at high speeds so awkward at times. The worst situation I found myself in all week was slowly sliding down the hill on my face, skis pointing uphill behind me, while children skied past effortlessly. I’m sure the people riding the lift directly above me while all this took place were enjoying themselves at that moment… not me.

Anyways, last Saturday woke up at 4am to drive to Marble Canyon, near Cache Creek, with my buddy Matt and his friend Steven who was going to be climbing ice for his first time. Matt also took me ice climbing for my first time when I was 15 and I was psyched, so it was cool to see him continuing to introduce others to the sport. Steven was psyched too, and killed it, climbing very intuitively despite it being his first day on ice tools. It was good to spend a whole afternoon climbing around on fat ice getting a feel for my new tools, a pair of DMM apex’s. Afterwards we crashed at a motel in Lillooet but Matt and Steven had to head home in the morning. I decided to book the room for another couple nights and had my friends drop me off on the Duffey Lake road near a route called ‘Sychronicity’.

I had never climbed ‘Synchronicity’ before knew it is considered one of the classics on the Duffey. It had appeared to be in nice shape on the drive up the previous day so I thought it could make for a good solo adventure. I walked in following some tracks and in an hour found myself at the ice and preparing to climb. I brought a rope to rappel, some cord to build threads, a couple screws and began cruising up the first easy pitches. The ice was good and the climbing went quickly and I shortly found myself below the final tier of the route. The ice on the left hand side looked good and was quite vertical so I decided to climb there rather than on the ramps to the right. As expected the climbing was great and the placements very secure, the position was also great with the valley floor a long ways down. At the very top of the route I climbed a delicate hollow tube which was more engaging then any of the more sustained ground below, but I found myself at the top of the route and rappelled back into the amphitheater below. ‘Synchronicity’ had not taken long and I had most of the day left, so I decided to climb another great looking route to the left called ‘Synchrotron’. The climbing was really fun, and being in a great head space after climbing one route already allowed me to move very fast. On the way down I noticed that the back of a beautiful pillar on the alternate ‘Mother’ finish looked to be in reasonable conditions so I soloed that as well. The climbing and position were phenomenal on the back of the steep pillar and at the top I found a narrow hole in the ice and squeezed through back onto the front to finish! After rapping back to the very bottom and hiking down to the creek I notice a frozen ice bridge spanning the river which allowed for a quick hike up to the road on the other side. Overall this was one of the sweetest ice climbing days I have had, soloing long moderate routes in a great setting! But I just realized how long that all took to type….. I seriously need to work on being concise so I don’t end up sitting on my computer ALL day. 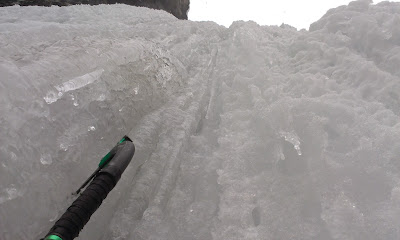 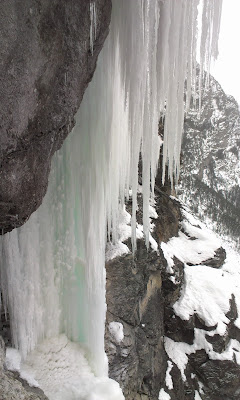 The back of the 'Mother' pillar looking nice and fun! 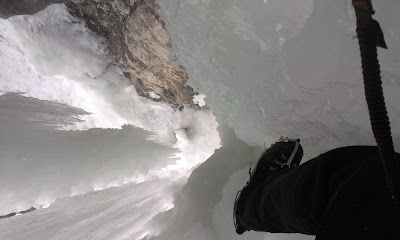 Soloing in behind the 'Mother' pillar. 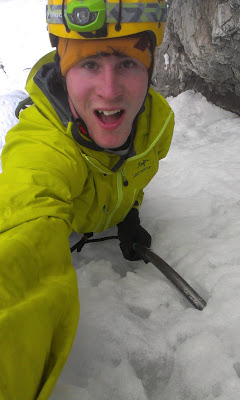 So the next two days I met up with my friends Francis and Lee and we climbed some nice lines in the Bridge River Canyon. The first day we climbed a route called Silk Degrees that doesn't form often. The first pitch was not touching down so we climbed moderate loose rock to the right and traversed back onto the ice for the 2nd pitch. After finishing Silk Degrees we continued up a gulley and climbed ‘Silk Worm’ right to the top of the canyon wall. It started snowing and got dark as we tried to find the descent and spent some time in a narrow gulley searching for anchors while getting bombed by spindrift. It was a quick reminder of what ice climbing is all about, adventure! After much down climbing and some raps we were back at the creek crossing and the car.
The next day we drove back into the Bridge river and plugged up the hillside to a small basin housing two rarely formed columns. The right hand line called ‘A Four Dressed up as Six’ looked to be in a good shape so we climbed that. It was beautiful! Not a long pitch, but steep and technical climbing with decent gear. Above that, we continued up the hillside then traversed back into the gulley below a classic route called ‘Capricorn’.  The crux pitch was long and much steeper than in appeared from below, with some funky ice on the vertical sections, totally awesome! We rapped the ice and managed to walk through the woods back to the car without having to rappel. Another amazing day that went perfectly smoothly! 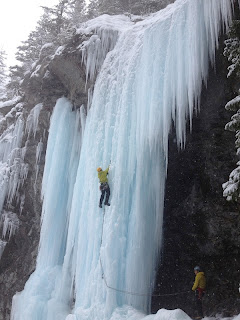 Leading 'A Four Dressed up as Six' 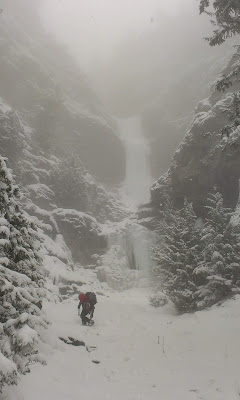 Lee and Francis had to get back to work in the city, but on Wednesday Chris Geisler drove to Lillooet and picked me up at the Motel, after a breakfast stop in town we cruised back up the Duffey to try an unclimbed route left of Synchronicity. I had noticed this hanging dagger feature earlier in the season and thought that it may be possible to drytool the rock to the right to reach the ice. We really had no idea what to expect, so Chris packed the hand drill and a few short bolts just in case. We crossed the ice bridge I had found on my solo mission a few days earlier and soon found ourselves at the base of the route. We ran up 3 moderate pitches of ice and mixed steps then began planning our attack to get to the hanging dagger.
I began drytooling up some very loose features on a slab, not hard climbing but insecure with absolute shit protection for the first 20m or so. I made my way to a steeper alcove with some better pro, and after a bit of thrutching around I found a sideways nut I could lean out on and bust out the hand drill. I had never hand drilled a bolt before, and it was ardous… especially using the hammer on the back of my ice tool. Chris laughed while I spent the better part of 45 minutes pecking away with the drill. Eventually I got the bolt in and fired the crux traverse to the ice, good hooking on slightly overhanging rock with an insecure crux move right at the point where a fall could become bad again! Once on the ice I ran up to a belay ledge then Chris led straight through to the top of the ice! It was so rad to put up this new route on our first try and for it all to go relatively smoothly. I will never forget my first hand drilled bolt either. We called our route ‘Duplicity’ (WI4, M6 R) as it two main pitches contrast each other a lot. The first being runout mixed climbing with some very loose rock, and the second being beautiful moderate ice climbing. 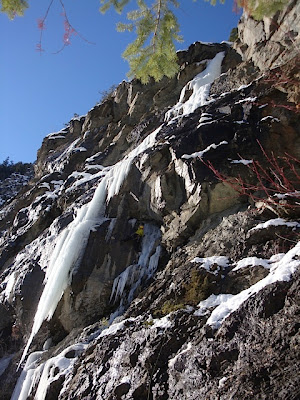 Leading the crux pitch of 'Duplicity' 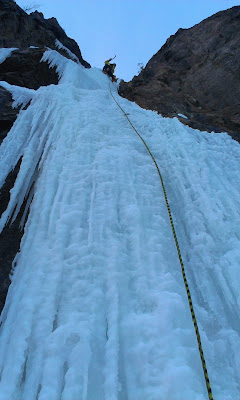 The next day I was off to Revelstoke with my friend Brette to attempt skiing for the first time. Brette is a bad-ass skier and I felt bad while she waited patiently for me as I fell on my face, lost skis, crashed into trees and whatnot. But after the three days I felt I improved quite a bit, not great by any means, but I could get down the hill without falling so I was psyched…. I could really see how skiing is an incredibly valuable skill to have dialed for bigger mountain adventures. I think I am going to stick with it and try to improve my skills so I can get into ski mountaineering in the future! Just imagine skiing into a sick route, soloing it, and then shredding a gnarly chute on the way out or something along those lines. The only thing missing is a base jump off the summit!
Anyways, I’m done talking now, definitely don’t want to type anymore. But it looks like Squamish is going to have some bomb weather for rock climbing next week, so the adventures don’t have to stop anytime soon! Psyched. 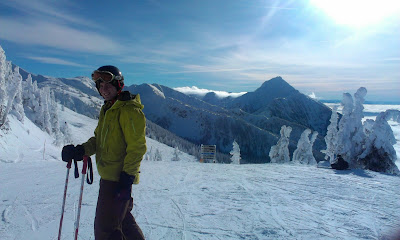