Well, it's safe to say that this summer in Squamish has been absolutely fantastic. My Slesse adventure in July inspired a lasting psyche that has perpetuated to this very moment as I sit here on my laptop sipping a cider and writing this blog. If I were to go into precise detail and attempt to recapture the magic of each and every adventure I have embarked upon between then and now I would find myself typing for ages and ages and spinning a tale that fills multiple pages. However, I have to work tomorrow and my coworker Chris would likely prefer that I be coherent in the morning, so I will tell one short story, post some photos, and try to be in bed by 11:15 at the latest.

I have selected one story in particular to share for a couple reasons. First and foremost I have selected this story because it is short and I tend to be somewhat lazy when it comes to blogging. The other reason I have opted to share my personal account of this particular tale is because it seems as if rumor of this ascent has leaked into a 'climbing forum' or two and I would like to clear up any ambiguity regarding my climb and simply tell the story for exactly what it is.

Anyhow, yesterday I awoke in my humble stairwell, prepared a delightful bowl of cereal and began packing to work on a project on the North Walls of the Chief. As I tried to select the equipment that I would bring along I became fed up with the dilemma of 'what to bring and what not to bring' and decided that I would just bring nearly nothing at all and go solo some classics. Sometimes it's best to settle on simplicity.

I thought the historic 'Grand Wall' would be a good place to begin my day and soon enough I found myself standing at the base of 'Apron Strings' with my rock shoes, a harness, two daisy chains, two quickdraws  and a single length sling. I climbed up two meters and then suddenly thought to myself, 'I may as well time this' and reversed to the ground to check my watch/phone. It was 10:32, I waited for it to change to 10:33 but it was taking too long so I shoved the phone back into my pocket and began climbing instead.

I flew up Apron Strings feeling greeeeeat and realized as I climbed the lovely 'Merci Me' that I was making considerable upwards progress in a relatively short time frame. I decided to continue climbing at a fast but comfortable pace, and check in on my time when I reached Bellygood Ledge, 10 pitches into the route.

I passed a party at the start of the traverse to the Split Pillar, and as I hand railed along the right trending flake I noted that the stone was peppered with 'silverfish' aka 'rock lobsters' that were leaping from their nests in the crack onto my hands and arms and crawling up my bare arms onto my torso. While I would normally find this unpleasant, free soloing is no place to get 'grossed out' by insects so I simply carried on.

I swam up the perfect hand-jams of the split pillar, pulled the technical crux of the Sword and laybacked the thin finger locks to the beginning of the long bolt ladder. I used my daisy chains on the bolt ladder as well on Perry's Layback, then cruised along the Flats and up the excellent juggy 'Sail Flake' soon finding myself running along bellygood ledge to the start of the Roman Chimneys.

I checked the time, I had 18 minutes to solo the chimneys in order to match the current speed record (59 minutes held by Alex Honnold and Mason Earle) This is where I actually committed to an attempt to break the record. I had never soloed the Chimneys before, so I climbed cautiously, particularly through the initial 5.11a slab crux. As I power laybacked a slightly damp 11a offwidth I thought to myself, 'even if I don't break the record I won't be trying this again', but soon enough I was racing through the gritty face climbing that avoids an 11+ roof crack and up the final 5.10 corner to the top. I checked the time as soon as I reached the ledge that marks the end of the Roman Chimneys, it was 11:30 bang on. I had taken somewhere between 57 and 58 minutes, juuuuust shaving a minute or two off the previous record!

It was quite spontaneous, I certainly didn't go to bed the night before thinking about breaking any records. In fact the thought didn't enter my mind until I was three or so pitches up the climb and moving steadily along. I never felt as if I was 'rushing' or throwing caution to the wind. I climbed as quickly as I was comfortable with, and thoroughly enjoyed the whole experience!

Great, woohoo. I got the record. Stoked. Okay whatever, at least its held by a Squamish local again and not some visiting yanks he he he.  I decided to celebrate afterwards by free soloing 'Borderline' into High Plains Drifter, making for a total of about 30 pitches of climbing up to 5.11c. Good times!


Now I will quit typing and post some photos from my Summer so far, complete with captions so you all know what you are looking at. 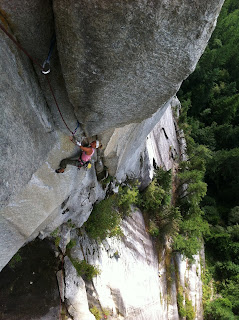 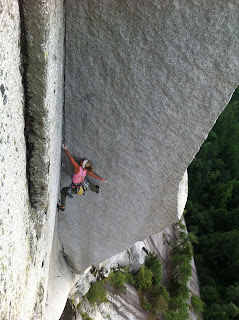 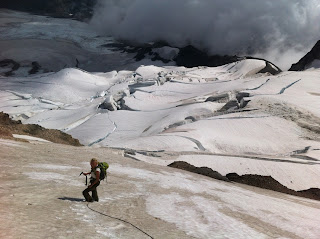 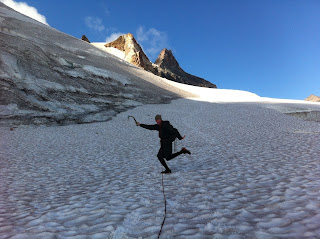 Not sure what I'm doing here but its amusing. 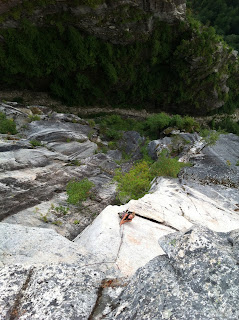 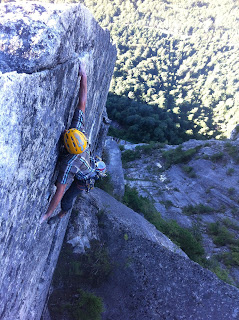 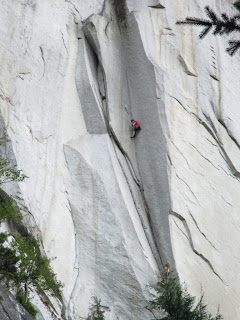 Trying to Flash the Shadow, I fell.