Well... I've been meaning to update for a while but every time I sit down to write something I decide to wait until I return from that 'next adventure' so I have more to write about. Blah blah blah, just more excuses for being lazy. But anyways, I really have been having a tonne of fun since I last posted so I may as well say something about what I have been up to these past couple months.

It rained a lot in Squamish in November and December and there was not a whole lot of action around town as is typical of Squamish this time of year. But on one particularly clear and dry day in November I took a spin up to the Smoke Bluffs to check out a line called 'Smashing Windows' that I had tried earlier in the year only to get shut down by dicey smears and warm temperatures. Friction was excellent that day and I quickly unlocked the radical slabby sequence on the lower arete and sent the route on my third lead attempt. All I can say is what a sweet route. As soon as you leave the ground it's game on for the steep lower section and linking the crux in one go is a memorable experience! 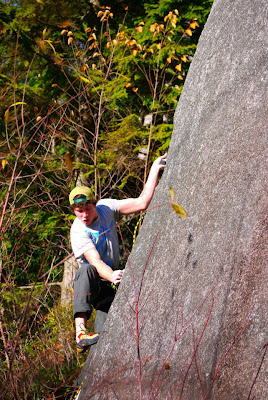 Paul Mcsorley posted this shot of me on 'Smashing Windows' on facebook. So I stole it from there, thanks Paul!

After 'Smashing Windows' it rained... a lot... again... so I spent some time keeping myself sane by climbing in the gyms of Vancouver. Good times were had. There were some faceplants, spinning holds, I got in trouble for wearing street shoes on the mats and tried to find natural pro by tying off holds.

After a few weeks of tweaking out my tendons I decided to tone it down a little and check out a mellower zone called Helmcken Falls in the interior of B.C.

Helmcken is a 450ft waterfall in the interior of B.C, and spray from the waterfall blows back into the huge overhanging cave behind the falls and freezes to the rock creating 'alien like' ice sculptures. Will Gadd and Tim Emmett first explored the possibility of climbing these overhanging ice features and established the route 'Spray On' which was later extended to the top of the wall last year by Emmett and Klemen Premrl. Their route 'Spray On... Top' is more or less regarded as the wildest looking mixed climb in the universe, overhanging nearly as much as it is tall.

Chris Geisler spent some time climbing at Helmcken last winter and was psyched to go back, and I was psyched to check it out. So we drove straight from Vancouver to the falls and spent a couple days, along with Josh Lavigne, trying to establish another line in the cave. Unfortunately conditions were not quite ideal for climbing as the cone that usually develops at the base of the falls was not there to contain some of the wind/spray, so we were dealing with continuous high winds followed by raging spray and falling ice. We only climbed one short pitch of wildly steep ice features before deciding to high tail it out of there and wait for more settled conditions. 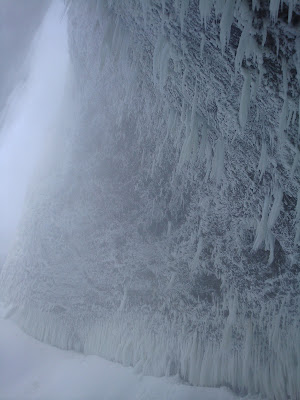 Although we didn't manage to climb a whole lot I am absolutely amped on our little adventure and cannot wait to get back ASAP. Hopefully we find the cave to be in safer conditions and can get some more climbing  done. I love this place and am more than happy to spend my time and $$$ to climb here in the winter. I can't imagine a more radical place to climb ice/mixed and the potential for new routes is endless. But there is a disclaimer.. this place is dangerous. You have to be in full alpine mode, always aware of what is happening around you, the objective hazard in some areas is some ways comparable to hanging out in a village with a sniper.

Here's some more photos to show how amazing this place is! 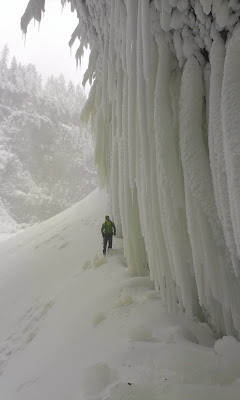 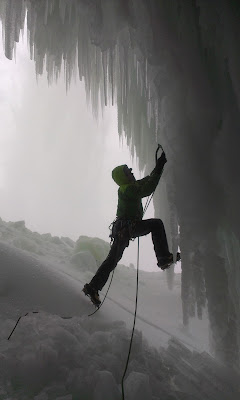 This last weekend was beautiful and very chilly here in Squamish, and great times were had chasing the sunshine with good friends. Conditions were perfect for climbing hard slabs, so I spent some time working on a new project of mine in the Smoke Bluffs. I did all the moves, and linked most of the climb clean but got shut down going for the send. Now my tips are cut up and bloody from pulling on razor sharp crystals. But this little route I am working on climbs really well, some very tricky and precise moves. But also dynamic and powerful on minuscule holds. It feels harder than any of the other slabs I have climbed in Squamish, but who knows? Maybe I'm reading the moves wrong? Always hard to tell with this kind of climbing. Looking forward to many more attempts in the near future, I am sure it will take a bit of work to get this thing done but will be well worth the effort. PSYCHED!

Posted by marc_leclerc at 8:51 PM No comments: